3D models soon to be unveiled at the Smithsonian Institution.

The Smithsonian Institution is revealing a new 3D scanning and printing project that will make its vast collections of 137 million objects more accessible to the public online, and allow for 3D models to be made in a variety of materials, from stone to metal and more.
A 3D viewer, developed exclusively for the Smithsonian by Autodesk, enables Internet users from around the world to examine and even print out many 3D models of well-known objects in the museum's collections as well as pieces in storage that are seldom or never seen.
Researchers, schools, and anyone with a computer will be able to study the scanned objects in-depth. Museum educators are working to create tours of certain objects to help explain their significance to an online audience.
Among the high-profile pieces already digitized are the Wright brothers’ first airplane, Amelia Earhart’s flight suit, casts of President Abraham Lincoln’s face during the Civil War and a Revolutionary War gunboat.
Annually, $350,000 has been designated for the 3D project, but the Smithsonian would like to raise $15 million to create an innovation center on the National Mall that will attract visitors to come and make their own 3D prints of museum objects.
The digitization of the museum's collections is part of growing trend toward more interactive museums. Said Smithsonian digitization director Gunter Waibel, “Now museums are really rethinking their relationship with their audience, and they’re trying to empower their audiences to help them along whatever learning journey they’re on.” 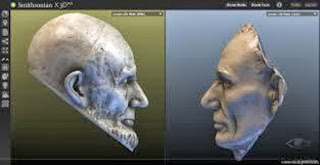 Posted by The Sculpture Ranch at 4:33 AM

The Sculpture Ranch
West of Johnson City, Texas, United States
The Benini Studio and Sculpture Ranch located in the Texas Hill Country... On these hilly, Mediterranean-like 147-acres, national and international artists are placing large-scale, contemporary sculpture. The galleries are filled with paintings and sculpture ~ a 50-year span of Benini's paintings and divertimenti as well as guests artists from Italy and smaller sculptures by sculptors who have largescale pieces on the hills and trails. At this time, more than 100 pieces are installed outdoors by 44 sculptors. Tours of the project are free of charge but visitors must register before touring the grounds. Open from 10 to 6 Friday through Sunday. Call 830-868-5244 for more information.

The Benini Sculpture Ranch in The Texas Hill Country!